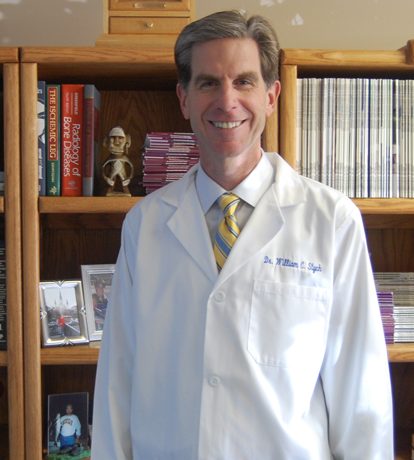 Upon completing his studies in 1992, he moved back and opened his practice as a podiatrist in Traverse City with his wife, daughter, and son. From 1995-2010, he was chief of the Podiatric Surgery section at Munson Medical Center. Some specific interests include diabetic foot care and sports medicine, but he treats all conditions of the foot and ankle.

Dr. Stych is Board Certified by the American Board of Podiatric Surgery and a Fellow of the American College of Foot and Ankle Surgeons. He passed the rigorous recertification examinations in 2005 and 2013.

When not working at his office or the hospital, Dr. William Stych enjoys traveling, spending time with his family, and making time every day to get out into the great Northern Michigan outdoors by cycling, cross-country skiing, or hiking.

If you are experiencing an urgent medical issue with your foot or ankle, we will work you into our schedule the same day if at all possible. More Info »