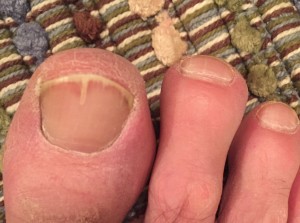 Today, we discuss one of the more prevalent, yet unsightly conditions of podiatry, the fungal toenail.

What is it? Who gets it?
Fungal toenails, also known as onychomycosis, effects anywhere from 2-13% of the western population. It is more common in individuals over the age of 60, however anyone can get a fungal infection. This relatively common condition can involve just one, or all of the toenails.

A fungal infection happens when fungus enters the nail through a small trauma, such as a cut or a break in the nail. This can be caused by dropping something on one’s toe or wearing improperly fitting shoes. Fungal toenails are not caused by poor hygiene. Anyone can get fungal toenails, however some people, such as diabetics and those with a compromised immune system, are at a higher risk. Fungus can be spread from person to person.
Symptoms
A fungal infection can cause thickening and discoloration of the affected toenail, and sometimes pain and discomfort in the corresponding toe. The toenail can become brittle, deformed, foul smelling, and even produce a crumbling of the nail on the underside of the toenail. The diagnosis may be confirmed by microscopic identification and a positive culture of the fungus from the affected toenail.
Treatment
Treatments for fungal toenails include topical creams, lacquers, and even oral medications. Rarely, the entire nail can be removed to allow for direct application of the topical antifungal medication. Topical medications are helpful for early, more superficial cases, however they are less effective than oral agents for more established situations. Oral medications are limited if a patient has liver disease. A baseline and follow-up blood test are sometimes needed to ensure patient safety while taking these oral medications.  Some of the topical prescriptions are very expensive, so not everyone can afford the latest nail medication.

Serial nail debridement by a medical professional may also reduce the number of fungi in the nails. It also reduces the risk of the patient accidentally cutting themselves and the complications associated with an open wound.

A myriad of home remedies can be found on the internet, such as the use of vinegar, various oils (coconut, lavender, grape seed, etc.), bleach, Vick’s, hydrogen peroxide, and other harsh chemicals. The effectiveness of these home remedies is highly doubtful and may cause skin irritation, as well as a waste of time that can be used in treatment.

Treatment of fungal toenails is complicated by the inherent thickness of the toenail, and the fact that feet are usually kept in shoes, which is a damp, warm and dark place; the ideal environment for fungus to thrive!
Prevention
Fungus is everywhere, however as stated above, it needs a crack or break in the toenail in order to take up residence. Here are some tips to avoid getting a fungal toenail:
• Keep feet cool and dry
• Wear properly fitting shoes
• Avoid walking barefoot in public places, such as locker rooms
• Keep the inside of your shoes dry.
• Don’t wear the same pair of shoes 2 days in a row
• Spray the inside of your shoes with a disinfectant, such as Lysol, once per week (or more)
• Avoid sharing shoes with others
• Avoid nail salons with inadequate sterilization protocols